I did not edit out a lot of footage so people could get a feel for what it takes to cast a project such as this in real time. Thanks to Eric Schaeffer and Dan from Majestic Concrete Design for demonstrating their technics. Materials Used: • Trinic TEC-10 Admix (approved for use in PCI certified plants) • Trinic Plasticizer • 3 mm HD fiber, available from Trinic • ½” Cemfill 60 Bundled Glass Fiber, available from Trinic • Trinic White Silica Fume • Portland Cement • Sand 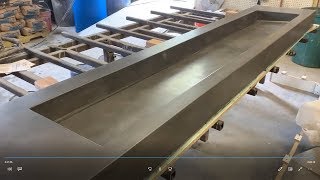 Ultra-high performance concrete (UHPC) is a new class of concrete that has superior workability, as well as mechanical and durability properties that far exceed those of conventional concrete. To achieve these properties, a very dense internal structure and the very low water-to-binder ratio (w/b) generally are necessary. While particle packing models are typically used to design UHPC, due to the complexity of the composition interaction and characteristics of UHPC, these models might not necessarily provide the best design, which leads to the need of experimental study to justify UHPC performance. The evaluation of the impact of various design parameters on the properties of UHPC is also needed. A study and evaluation were performed with multiple series of UHPC mixtures prepared with different design parameters and considerations. The impacts of different aggregate, types of fibers, High Range Water Reducing (HRWR), w/b, types of cement, types and quantities of supplemental cementitious materials (SCMs), and different total binder content on UHPC performance were presented. Furthermore, the extensive amount of fine materials, the absence of coarse aggregate, and the very low w/b often make the process of UHPC production challenging. This study included evaluations of the impacts of mixers on the properties of fresh and hardened UHPC. The comparison of these mixers was used to determine whether mixtures developed in the laboratory were comparable to those used in the field.

Mix design for Self Compacting Concrete or SCC cannot be conducted directly because there are many control parameters in its rheological properties. This case becomes more complex if it should achieve a high compressive strength. The following is the simple approach that can be used, firstly, determining the flow of mortar mix which was designed based on the high strength determination. The mix design of SCC is then determined by adding the coarse aggregate in the mortar mix. In this research, the design of mix mortar flow with ultra-high compressive strength was made by the type I cement, i.e. 15% of cement weight silica fume with the ratio of the cement and the fine aggregate was 1 : 0.35, the fine aggregates was on the VI graded and the superplasticizer content was 1.3%, 1.4%, 1.5% and 1.6%. In case of the SCC, the coefficient was taken on 1.4, 1.6, and 1.8 from the volume of void aggregate, the coarse aggregate value was using the remaining volume of absolute mortar on one cubic meter concrete with the size of 4.8 mm - 9.6 mm. Test results showed that the mortar flowability was 170 mm, 180 mm, 220 mm and 250 mm with the compressive strength was 83.1 MPa, 96.8 MPa, 111.4 MPa, and 135.5 MPa respectively. Mortar mix with 1.6% superplasticizer was then used for making the SCC and the results showed that the concrete flow was 460 mm, 580 mm and 660 mm while the compressive strength was 88.2 MPa, 100.0 MPa, and 97.9 MPa. Therefore, it can be concluded that by using this approach, SCC can have 580 mm of flow and 100 MPa for compressive strength.

Concrete has come a long way since its use in building the Roman Coliseum in 70 A.D. New methods of construction as well as improvement in cement formulas, aggregates and admixtures have significantly increased the type of projects for which concrete can be used. The strength and properties of various concrete mixes have led the way for larger buildings, safe and sound bridges and more durable structures. With the invention of reactive powder concrete (RPC), the use of concrete has increased. RPC with trade name „DUCTAL‟ was developed in France by researchers Mr.Richard and Mr. Cheyrezy in the early 1990s at Bouygues, laboratory in France. The world‟s first RPC structure, the Sherbrooke Bridge in Canada, was constructed in July 1997. RPC is an ultra-high-strength and high ductility cementitious composite with advanced mechanical and physical properties. It is a special concrete where the microstructure is optimized by precise gradation of all particles in the mix to yield maximum density. It extensively uses the pozzolanic properties of highly refined silica fume and optimization of the Portland cement chemistry to produce the highest strength hydrates. RPC was nominated for the 1999 nova awards from the construction innovation forum. RPC has been used successfully, for isolation and containment of nuclear wastes in Europe due to its excellent impermeability. This new material demonstrates greatly improved strength and durability characteristics compared with traditional or even high-performance concrete. Classified as Ultra-High Performance Concrete (UHPC), or Reactive Powder Concrete (RPC). The improved properties of RPC are obtained by improving the homogeneity of the concrete by eliminating large aggregates, increasing compactness of the mixtures by optimizing packing density of fine particles, and using fine steel fibres to provide ductility. The HPC used for nuclear waste containment structures of Indian concrete power plants are having moderate compressive strength, moderate E value, uniform density, good workability, and high durability. There is a need to evaluate RPC regarding its strength and durability to suggest its use for nuclear waste containment structures.

A Detailed History of Concrete

Burnt Lime and Civilization [All historical dates are annotated BCE – before the common era – or CE – common era – rather than the Christocentric BC – before Christ – and AD – anno domini (year of our lord).]

While the Roman Empire was known for its magnificent and widespread use of lime cement mortar for floors, walls and aqueducts, there is now archeological evidence that the earliest uses of burnt lime predates civilization and began in Paleolithic times among hunter-gatherer peoples – not the sedentary agriculturalists of the Tigris-Euphrates and Nile deltas as commonly thought.

Göbekli Tepe (“Potbelly Hill”) is an archaeological site at the top of a mountain ridge in the Southeastern Anatolia Region of Turkey, near the headwaters of the Euphrates River. It was excavated by a German archaeological team under the direction of Klaus Schmidt from 1996 until his death in 2014.

In the Roman era, it was re-discovered that adding volcanic ash to the mix allowed it to set underwater. Similarly, the Romans knew that adding horse hair made concrete less liable to crack while it hardened, and adding blood made it more frost-resistant. Crystallization of strätlingite and the introduction of pyroclastic clays created further fracture resistance.

German archaeologist Heinrich Schliemann found concrete floors, which were made of lime and pebbles, in the royal palace of Tiryns, Greece, which dates roughly to 1400–1200 BC. Lime mortars were used in Greece, Crete, and Cyprus in 800 BC. The Assyrian Jerwan Aqueduct (688 BC) made use of waterproof concrete. Concrete was used for construction in many ancient structures.

The Romans used concrete extensively from 300 BC to 476 AD, a span of more than seven hundred years. During the Roman Empire, Roman concrete (or opus caementicium) was made from quicklime, pozzolana (volcanic ash), and an aggregate of pumice. Its widespread use in many Roman structures was a key event in the history of architecture, termed the Roman Architectural Revolution. This freed Roman construction from the restrictions of stone and brick material, and allowed for revolutionary new designs in terms of both structural complexity and dimension.

Concrete, as the Romans knew it, was a new and revolutionary material. Laid in the shape of arches, vaults and domes, it quickly hardened into a rigid mass, free from many of the internal thrusts and strains that troubled the builders of similar structures in stone or brick.

Modern tests show that opus caementicium had as much compressive strength as modern Portland-cement concrete. However, due to the absence of reinforcement, its tensile strength was far lower than modern reinforced concrete, and its mode of application was also different:

Modern structural concrete differs from Roman concrete in two important details. First, its mix consistency is fluid and homogeneous, allowing it to be poured into forms rather than requiring hand-layering together with the placement of aggregate, which, in Roman practice, often consisted of rubble. Second, integral reinforcing steel gives modern concrete structures greater tensile strength, whereas Roman concrete could depend only upon the strength of the concrete bonding to resist tension.

The Pantheon was one of the wonders of the ancient world: it has exterior foundation walls that are 26 feet wide and 15 feet deep and made of pozzolana cement (lime, reactive volcanic sand and water) tamped down over a layer of dense stone aggregate. That the dome still exists is something of a miracle. Settling and movement over almost 2,000 years, along with occasional earthquakes, have created cracks that would normally have weakened the structure enough that, by now, it should have fallen. The exterior walls that support the dome contain seven evenly spaced niches with chambers between them that extend to the outside. These niches and chambers, originally designed only to minimize the weight of the structure, are thinner than the main portions of the walls and act as control joints that control crack locations. Stresses caused by movement are relieved by cracking in the niches and chambers. This means that the dome is essentially supported by 16 thick, structurally sound concrete pillars formed by the portions of the exterior walls between the niches and chambers. Another method to save weight was the use of very heavy aggregates low in the structure, and the use of lighter, less dense aggregates, such as pumice, high in the walls and in the dome. The walls also taper in thickness to reduce the weight higher up.

Binders are materials that act as a bonding agent that when mixed with aggregate and water form mortar, which is used to bond various masonry units together playing a structural and decorative role in a building. There are four main binders that have been used throughout masonry history, lime, hydraulic lime, natural cement, and Portland cement, all of which are derived from limestone. Binders affect the physical and chemical properties of the mortar including its strength, how quickly it hardens or sets, and how it reacts with surrounding materials. Below is a brief history of each binder type, the chemical reaction of their production, and their physical properties.